How do you make the most of a pay rise?

First of all, congratulations! Getting a pay rise is a great thing and can boost your financial wellbeing but as many of us will admit, increased pay can often just lead to increased spending. This is also known as lifestyle inflation. Research from Direct Line Life Insurance found that the novelty of a pay rise wore off within 6 weeks, and one in five workers wouldn’t cope financially if their income reduced to its previous level. So how can you make sure that a pay rise is actually going to help you in the long run?

For example, a £1,000 pay rise for a basic rate taxpayer doesn’t sound quite exciting when you take out tax, national insurance, and pension contributions: 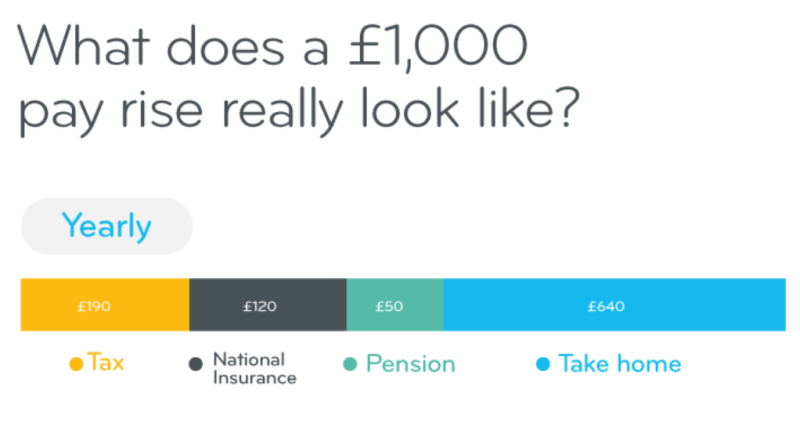 Use a salary calculator like www.thesalarycalculator.co.uk to work out what your new monthly take-home pay will be. It can be especially confusing if a pay rise means a shift into the higher-rate tax band. Remember that you are only taxed 40% on the amount of pay over £50,000, not your entire salary!

What do you want to do with it?

When faced with an increase in income, we can all be tempted by the urge to treat ourselves. Often we end up spending a bonus or pay rise before we even get it! And while a small treat is well deserved, it’s a good idea to take time and reflect on your financial position and goals before spending it all. It is very easy for any increased income to just get absorbed into daily spending. But there’s a great opportunity for you to be savvy, and use your increased income to improve your financial situation.

It could be a good idea to keep your spending at its current level, and set up a standing order to automatically use the extra money for another purpose; paying off debt, building up an emergency fund or saving for the future.

Paying off high-interest debt should be the first thing that you do with any increased income – and setting up a standing order to transfer the pay rise to debt is one way to automatically speed up your debt repayment timeline. Just make sure you won’t be hit with any early repayment fees that some lenders charge. The bonus of this is that once the debt is repaid, you’ll have freed up even more disposable income, essentially getting another pay rise.

After your high-interest debt is tackled, building an emergency fund should be the next focus. Our 2019 DNA of Financial Wellbeing research found that one in three employees had less than £1,000 in savings. That’s a lot of people who may need to turn to debt if an unexpected expense occurs. Aim to build up an emergency fund of at least three months’ worth of expenses to really reduce financial stress and provide a buffer against any future negative events.

Finally, it’s important to prepare for the future. Either save into an ISA for important life milestones, such as a house purchase or home improvements; overpaying a mortgage or increase your contribution to pension.

While an increase in income will already mean an increase in the amount you’re putting into a pension (as it is based on percentages), a pay rise can also be a great time to consider if you need to increase the percentage you are contributing. A good lifestyle in retirement can often feel unachievable, but the sooner you calculate if you are on track the easier it is to make adjustments if you need to. If you’re not happy with your current forecast - ask your employer if you can increase the percentage you are contributing - even shifting from 4% to 5% could boost your retirement pension pot by thousands of pounds.

A pay rise is one of the best times to boost your contribution percentage, the negative impact you might feel about sacrificing part of your salary will be hidden by your overall boost. If possible, get your employer to set this up in advance, before you even see what the potential ‘full’ pay increase could be.

What if your pay rise pushes you into a higher tax band?

If you get a pay rise that will tip you over £50,000 into the higher rate tax band, there could be significant impacts. Although the 40% tax is only on the amount over £50,000 there are other potential knock-on effects:

If you are only just tipping into this band, see if your company offers any salary sacrifice schemes which could drop your income back into the basic rate band – either through increased pension contributions (which will also get government tax relief) or any other schemes offered such as cycle to work or childcare vouchers.

A pay rise is a significant financial milestone, but it can easily be mindlessly spent. Make sure you take steps to ensure you know how to maximise the full benefits of your increased pay. 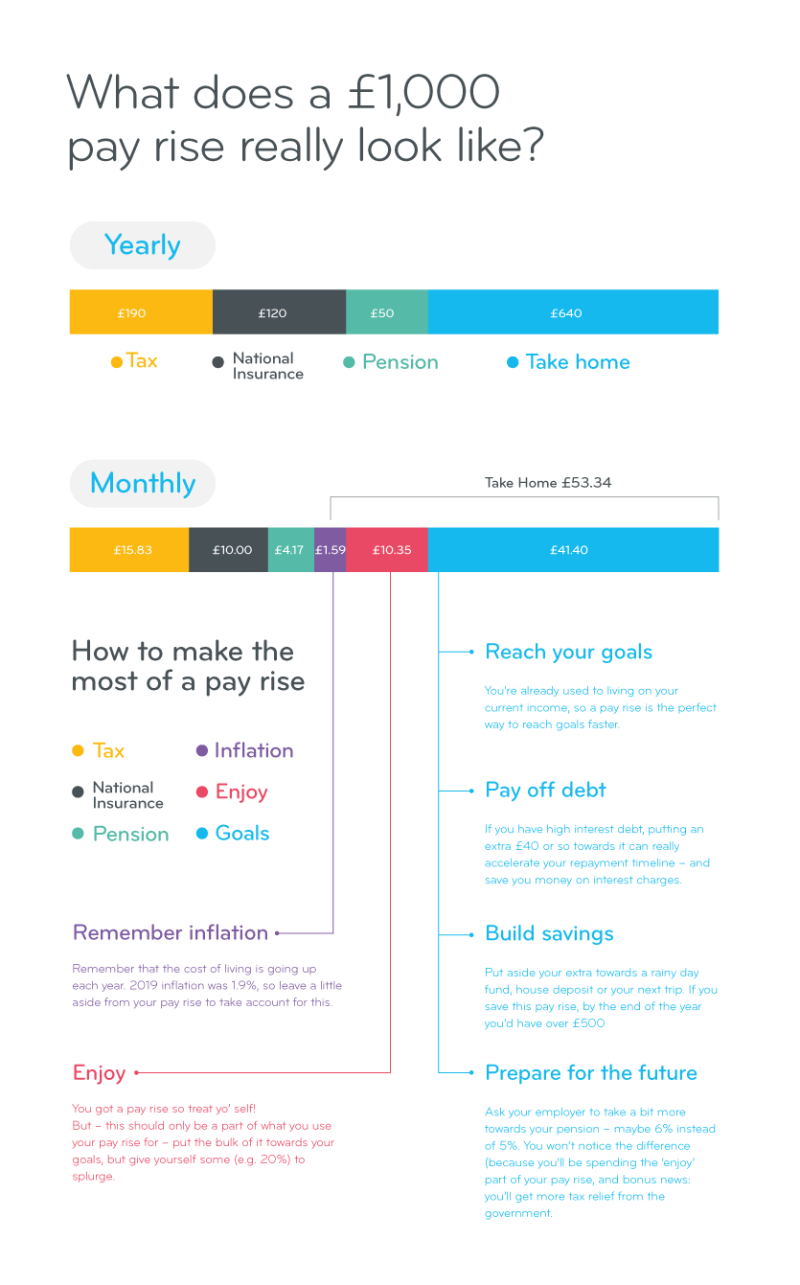